Mutua Universal was united in 2015 to the network “Companies for a Society Free of Gender Violence” that it develops the Ministry of Health Care, Social Services and Equality. Currently are 129 public and private companies those which associated with this initiative are.

Our Company is aware of the existing social problems and of the necessary involvement of all social agents in the prevention of the Violence of Gender. It is for this reason that offer the maximum collaboration with the above-mentioned Ministry to be contributed, with means to our extent, in the interests of to promote the sensitisation before the Violence of Gender.

For Mutua Universal the human health is the most significant thing, expert as a complete state of physical and social well-being. As are aware of that the Violence of Gender affects at all levels of a person's social life (included the workplace), promote stock of sensitisation with the aim of achieving a more healthy society, that is, free to Violence of Gender.

What Violence of Gender is considered?

The Violence of Gender is defined according to the Organic Law 1/2004, of 28 December, as “The demonstration of the discrimination, the situation of inequality and the power relationships of men on women and is practiced on these by who are or they have been its spouses or of who are or they have been linked to them for similar relationships of affectivity, even without coexistence”, and “Understands all physical violence act and psychological, included aggressions to the sexual freedom, threats, arbitrary coercions or hardship of freedom.”

How to recognise the Violence of Gender?

The Violence of Gender is not only recognised for a physical aggression, there are certain behaviours, control attitudes or comments that are evidences of psychological violence, both by men and of women. Some of these signs are: (información available in the Website of the Ministry of Health Care, Social Services and Equality )

What to do in the event of Violence of Gender?

For one thing, recommend to get in touch with the free telephone of information and legal aid 016, public service put in motion by the Delegation of the Government for the Violence of Gender, in operation 24 hours a day. This service guarantees the data confidentiality of users people and it attends in 51 languages.

Similarly, in the Website of the Ministry of Health Care, Social Services and Equality there is a Website of back-up and prevention resources before Gender Violence cases (WRAP). This space allows the location of the police resources, judicial and of information, attention and advice, closer to a town: http://wrap.seigualdad.gob.es/recursos/search/SearchForm.action

Besides these external mechanisms, Mutua Universal's employees have a procedure for the conflicts prevention and resolution for psychological harassment at work and/or sexual harassment and/or reason of sex, as well as a Code of Conduct and a Service channel of Entirety.

In line with the acquired commitment, help to promote the latest campaigns start-ups for the Delegation of the Government for the Violence of Gender.

The Violence of Gender and new technologies

The boom of the new technologies has involved the appearance of new control channels and harassment. Nearly a 73% of the feminine town all over the world that it uses Social Networks has experienced or it has been exposed to some violence way, according to is underlined in the report that the fee of Digital Development of the UN. However, there is no need to forget that there are also cases of violence practiced by women on men.

There are several signs of Violence of Gender via new technologies, as the control of calls and messages in the mobile phone, the ban or control of the personal profiles in Social Networks, the harassment via chats, etc. There are even cases in which degrading photographs of the couples are hung or former-couples in Internet.

From Mutua Universal, in line with our commitment for a free society of Gender Violence, we want to raise awareness on this social problems that affects, above all, to next generations that are continuously connected to Social Networks and are vulnerable to suffer Violence of Gender by its couples (control) or by unknown people (harassment). It is for this reason, that we have created posters of raising awareness to sensitise to the town on this social problems: 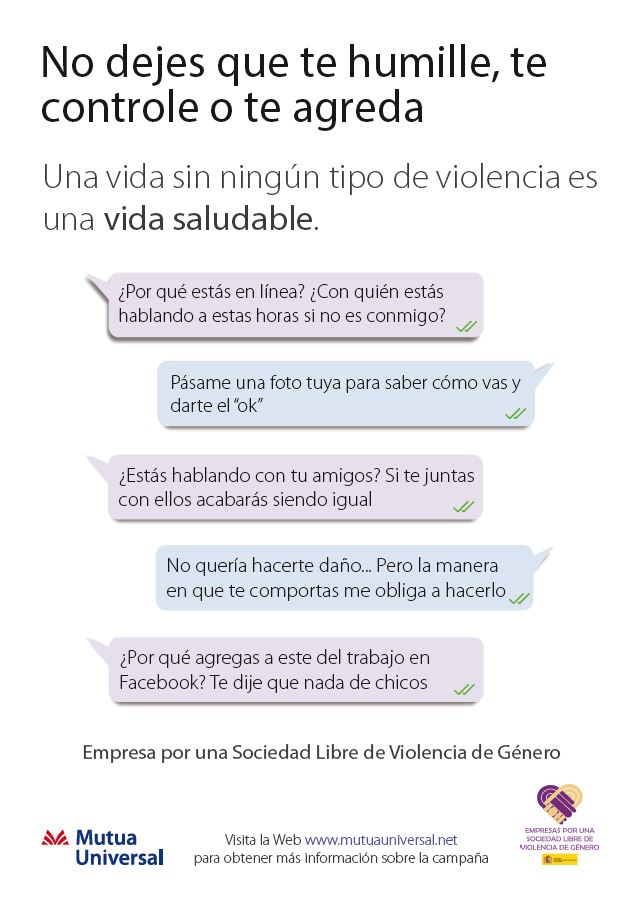